Welcome to PropTalk, a series on our blog where we interview the most influential and prolific thought leaders in the commercial real estate tech industry today. Know someone we should feature? Email me at katie(at)hqo.co.

If you aren’t receiving Franco’s Propmodo newsletter every day, are you even really in the proptech space? Franco is one of those writers where you can immediately tell that he’s truly interested and embedded in the content and space he’s covering. And I’m not just saying that because he recently wrote such a great piece on our funding from JLL, Navitas, DivcoWest, and others.

Franco is actively involved in both commercial and residential real estate as an agent, investor and property manager, and holds an MBA in entrepreneurship. As co-founder of Propmodo, he writes about the startups changing how CRE transacts, manages and uses space and their role in modern cultural and societal trends. Originally from the Bay Area, Franco now lives in San Diego. Make sure you explore all of the content and the multimedia approach that Propmodo takes to covering CRE technology.

Franco: Whoa, the toughest question first! I cringe every time I get asked what I do because it is a bit of a long story and I hate talking about myself but here goes. My background was digital marketing but I fell into real estate when my father passed away and I inherited the building he ran business in. I enjoyed real estate but really missed having a creative outlet so I decided to start writing about some of the things that were changing the industry. One of the article that I wrote got picked up by what was then CRE.tech. I hit it off with the creator of that site, Travis Barrington, and decided to come on-board as a co-founder when it was relaunched as Propmodo.
One of my peculiarities of my personality is that I get bored very easily. Because of this I try to find interesting angles for the ways that technology is changing the the built world. There is WAY too much generic, glorified press release content out there and the industry deserves better. We try to add big picture analyses and tell interesting stories at Propmodo. One of the reasons I think that we have been successful is that people know that if it isn’t interesting or useful, we don’t publish it. I feel so lucky that I get to talk to super smart people and write about important ideas for a living. I really think that technology is changing the world and I want to explore where we are headed.

Katie: Wow, thank you for sharing that. I want to talk to you about the future of this space because CRE tech is what you focus on day-in and day-out. What can we expect now, in the near term, and ten years from now?

Franco: I feel like I am more of a sideline observer than in the trenches but it does give me a unique view of where the interests lies. I think we are going to see a huge global expansion of PropTech. The pain points around buildings are pretty universal and we get emails from all over the world about the stories we publish.

I think we will start to see a global shift towards focusing on the users of buildings rather than the buildings themselves. We are also going to have a much better understanding that the worth of a building has more to do with the value it provides than the price of the buildings around it. As there is more market transparency and more tangential data associated with properties there will be a lot better understand of what drives value. 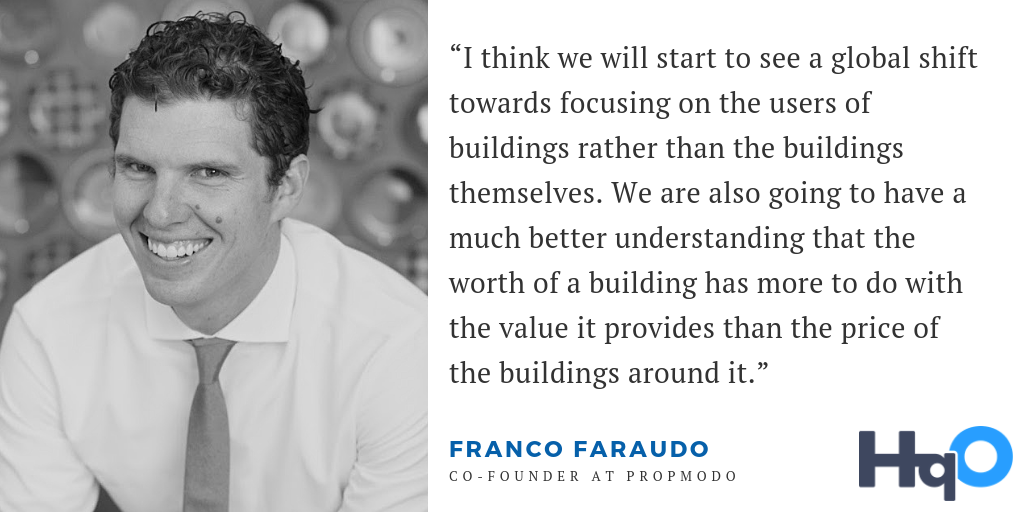 Katie: In your opinion, what’s the proptech segment to watch?

Franco: I think that people in the sector should be watching all of it. One of the most interesting things about real estate is how interconnected it is with the world. Focusing on one sector can leave you ignorant of changes happening elsewhere.

One thing that I think will be a lot bigger topic of conversation is how real estate is involved in the civic good. More than any other asset, real estate depends on local regulations. In order to create valuable real estate the industry needs to create prosperous communities. I am always shocked at how little the real estate industry participates in town and city meetings. Technology will be one of the things that helps bring officials, the real estate industry and the population at large together to help figure out way to improve the spaces around us.

Katie: OK, this is a popular question, if we experience an economic downturn, what do you predict happens to the WeWorks, Knotels, and Industrious’ of the world?

Franco: First, I think that it is important to point out that this isn’t an apples to apples comparison. WeWork and Industrious are both co-working, but have very different target markets. WeWork is largely targeted at the “gig economy,” this can be seen by their purchase of a coding school and starting to cultivate brands created in their walls. Theoretically they would be hit by an economic slowdown but the amazing amount of money that has been invested in them will certainly help get them though quite a bit. They are also starting to purchase properties in order to help them not be so beholden to landlords even though it should be said that in a downturn landlords will likely have high vacancies as well and so would be happy to lease space to a big, stable company like WeWork.

Industrious is in co-working as well but they tend to cater to more established operators and have recently started to go away from the leasing model in favor of revenue partnerships with landlords. They would certainly hurt in a downturn but I think that they have been smart about their expansion and haven’t overstretched themselves to the point of failure under stress.

Knotel also does revenue partnerships with landlords but is not co-working. They build out spaces for companies. In a downturn you might make the case that companies would want to outsource the process of finding, leasing, designing and building office space so I think that they would be fine. I know you probably wanted me to talk about how there would be blood on the street but I just don’t think that would be the case. They would be effected, for sure, but all of them are products of a changing real estate environment and I don’t think the economy will change that.

Franco: Well, I guess I never thought about it like that. Ok, I’ll play. Buildium is in a pretty crowded space so I think I would buy them. Hopefully I would be able to get a nice valuation because they now have a lot of other companies hungry for market share. Honest Buildings has some amazing partnerships so I think I would invest there. A lot of the value of PropTech companies is tied to who they work with since there are so many huge property companies. As far as Compass goes I would build it because they are really a brand that has been able to on-board (and buy) top agents.
Brands are some of the most valuable things in the world but they are also always prone fall to an even cooler rival.

Katie: Love it. Franco, you’ve shared some really interesting perspectives here today and we appreciate you taking the time!