PropTalk: 5 Questions with Michael Beckerman of The News Funnel and CREtech

Welcome to PropTalk, a series on our blog where we interview the most influential and prolific thought leaders in the commercial real estate tech industry today. Know someone we should feature? Email me at katie(at)hqo.co. Otherwise, sign up for our once-a-week newsletter so you never miss a PropTalk again.

I’m so excited to be speaking with Michael Beckerman today. He is the ultimate connector in commercial real estate and tech, always bringing people together at one of his many events, or simply connecting the dots between companies, owners and operators, and investors in the space.

At HqO, we’re big fans of Michael and the CREtech community and try not to miss any of the events they throw across the country. Real world community building is so important, and Michael & crew just gets that – likely because of Michael’s 25-year career in the real estate communications sector. After founding one of the top 50 largest independently owned public relations firms in the country, Michael launched The News Funnel in March 2011, a digital content marketing platform, and now serves full-time as the CEO of the company. Michael has been named one of the most influential bloggers and social media experts by several leading media sources and for good reason, so let’s jump in.

Wow, thats a good one. I typically shy away from the personal because who really cares :). But now that you have asked…1) Father/Husband 2) Buddhist 3) Dave Grohl wannabe and 4) Happy, appreciative guy!

In a professional sense, I am someone who is constantly challenging myself. As someone who failed miserably in school and had really zero professional skills, what excites me most is pushing myself further than I ever thought possible. And not beating myself up when I fail on a daily basis. In fact, embracing failure as a core growth philosophy. To me, that’s what the journey is all about.

Pushing myself hard, without self criticism or self-doubt, has always been my core work philosophy. When I was at the top of my game in my PR life, I knew it was time to go and start from the bottom again. And re-learn. And stretch myself. And work my ass off and hustle like I did when I was 24 and not 54 (which I am now). I am once again painting a blank canvas and while that’s  incredibly hard every single day, I would rather be challenged and climb than chill and sail. 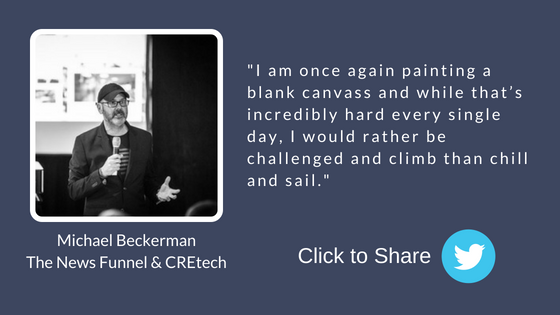 Katie: You’ve been ingrained in the CRE tech movement with all of the various communications, content, and event initiatives under your belt.  Where do you see the proptech space headed in the next 10 years?

My first prediction is that we will agree on one friggin’ term to describe our world! Maybe it will just be “TECH!” I prefer “CREtech” (oh and BTW so does my friend Steve Weikel!) Others are using “Proptech,” which I think is actually too limiting and still others are using “BuiltWorld.” We need to have a Summit and all agree on one term like “FinTech”.

Now, onto the more substantial thoughts. I do think that we will enter a period where those that are not embracing tech both as a powerful tool to improve every aspect of their business, but also to enhance their relationships with the people they serve like tenants, communities and local stakeholders will be left behind.We live in a “tech eats the world” culture now and if you aren’t on the leading edge you are on the cliff!

Second I see “Space As A Service (SAS)”, I stole that from my friend Antony Slumbers from across the pond, as the new paradigm and the most exciting transformation of commercial real estate I have seen in my thirty years in the space.

Katie: Oh we like that concept, too. So, what’s the top proptech segment to watch?

There you go again with that damn “Proptech” term ;) Absolutely, it’s the SAS phenomenon. Every landlord, whether multifamily or office, is going to have to embrace the fact that tenants now have the power. They want amenity rich, tech savvy buildings with great programing and communications. Employees want it. Tenants want it. This generation in particular expects it. Landlords will have to completely change the way they build, operate and communicate now and forever. 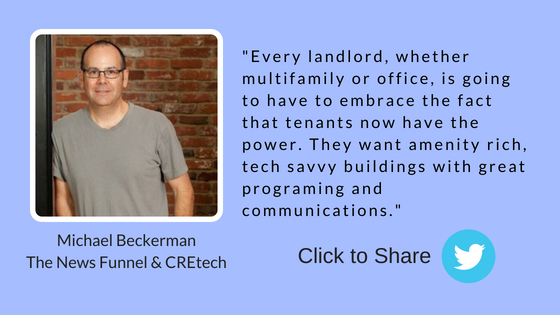 Katie: Forgive me! HqO is proptech so it’s ingrained in my head. OK, so in a downturn, what do you predict for part of the SAS segment – the WeWork’s, Knotels, and Industrious’ of the world?

Well, some will get stronger and some will get weaker. I think the short term, more flexible space sector will get more desirable as tenants don’t want to lock in for the long term given an uncertain economy. But those that played the arbitrage game the wrong way or have too much leverage or VC funding might get caught in a lot of down rounds.

OK, in our last question we ask you to think like a landlord or broker.

Katie: Choose whether you would Invest, Buy, or Build in the following proptech companies: (1) VTS, (2) Openpath, and (3) Hello Alfred.

Katie: Ha, you’re right that’s definitely a Chase question. Fair enough. Thank you for your time and your insight, Michael! You rock.