Michael Beckerman, founder of The News Funnel and CREtech, has written about commercial real estate technology since 2011. Last month, he wrote a blog “When I Finally Realized That CRE Tech Was Gaining Serious Momentum.”

“Of course the CRE tech industry is led by companies like Prologis, Hines, GGP, CBRE, JLL, Brookfield, etc… But when the developers and brokers that are in the mid-market of the industry start taking notice of what’s going on, I really do believe we are starting to get closer to that tipping point in CRE tech.”

If you subscribe to Malcom Gladwell’s analysis in his book, The Tipping Point, Beckerman’s realization incorporates a few of Gladwell’s three concepts that indicate widespread popularity: the Law of the Few, the Stickiness Factor, and the Power of Context. In examining CRE tech under the lens of these principles, one could argue that we are nearly approaching the tipping point, and here’s why…

The Law of the Few

Beckerman’s observation that the mid-market of the industry is starting to learn more about CRE tech, make industry connections, connect with solution providers, and actually purchase, is a good indicator that the Law of the Few have paved the way, creating intrigue, awareness, FOMO, and yes, even fear. Innovators have changed the status quo, but the connectors, mavens, and salesmen have truly lit the flame of interest to gain widespread adoption and persuade others to take notice.

In Gladwell’s book, he argues that the tipping point occurs when a dramatic divergence from prevailing conventional wisdom occurs. Real estate has long avoided digital disruption, and even six or seven years ago the idea that the consumerization of CRE would become nearly widespread would be shocking.

Some owners and operators might still shun the tech revolution that’s taking over CRE, but that point of view is truly being challenged now. Landlords and brokers can’t live without platforms like VTS and CoStar, and we’re beginning to see the same behavior take hold across many segments of the CRE tech landscape (as evidence by this graphic by Dealpath). 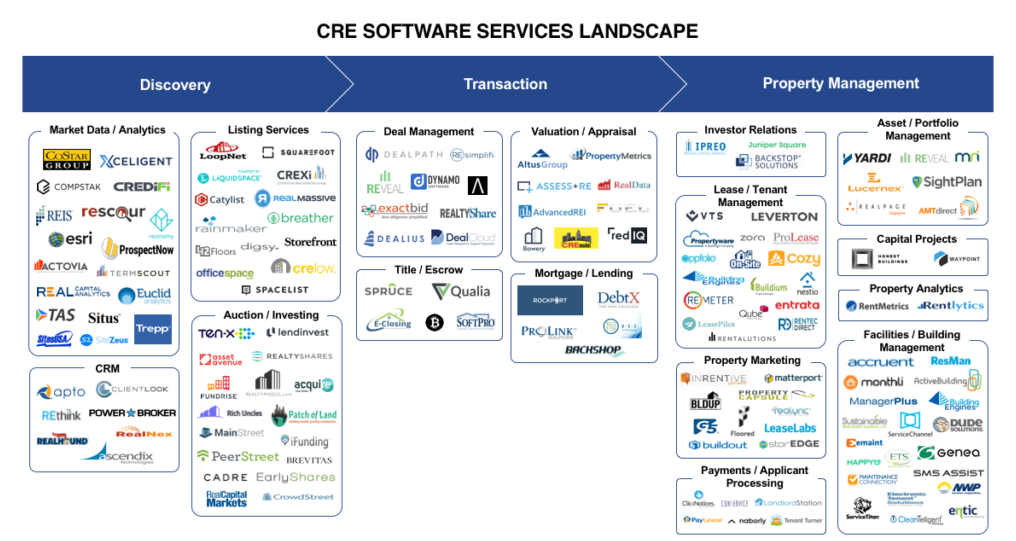 The Power of Context

The last stage of Gladwell’s book is all about timing. A large number of people need to embrace the movement and the overall environment has to be just right… Well, it seems like that time is near, if not already arrived. Millennials are poised to make up 50% of the workforce in two years, and 75% of the workforce just seven years from now, and they are changing the game in life and at work.

Proptech’s moment has arrived. For the office sector of CRE, the next generation of real estate professionals are rising up and they demand solutions that streamline their job and make them more successful. For owners and operators, the next generation of tenants are speaking up, and they have a whole new set of requirements for their workspace. Tech disruption includes tenant data to make better decisions, IoT and smart buildings, and the consumerization of the office experience, just to name a few.

With the rise of WeWork and other coworking experiences, paired with the baseline expectations for digital experiences set by Uber, Airbnb, and others in various industries, the timing has never been better.